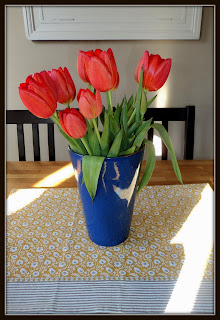 It was a small thing that we did. It was barely more than a gesture, really. It took less than two hours of our time.

We almost didn’t do it, and when 5-year-old Jake asked me to spend more time at the playground instead of making this quick delivery of a meal, some flowers and some cookies to an elderly friend, I felt that familiar tug towards ease.

It’s such a warm, sunny day. It’s the first Spring day of genuinely enjoyable outdoor play. It certainly wouldn’t be wrong or sinful to not go. I haven’t even called her yet to tell her we plan to pop over. And really, being outside with my kids on a sunny afternoon is not only just OK but even a valuable use of my time.

Every thought was true. And in fact, there are times when a settled decision to play with my children instead of serving others would actually be the right one.

But I know the difference between those two, and this wasn't a philosophical decision but simply the inclination to have an easier afternoon. As the pull towards ease grew stronger I remembered something I had read a few days earlier that had left a lingering and powerful desire in my heart: the next time I found myself confronted with the choice to give or receive, I wanted to choose to give.

The choice in this moment, though, this was different. Perhaps I expected the choice to be between out-and-out selfishness versus humble, sacrificial service. On this afternoon the choice was much more subtle: it was between service that was easy (a sunny afternoon outdoors with my children) or service that required more effort (buckling three kids into the car and driving a few kilometers across the city).

It’s worth saying that there certainly are times when the right decision would have been to continue in play with my children. As a wife married to someone in full time pastoral ministry, I don't undervalue the importance of child-focused playtime, and Justin and I are committed to giving our little ones a playful, light childhood. But on this particular day, my kids had already spent several hours at the High Park Castle Playground as well as the High Park Zoo, playing, enjoying, being silly, being kids. By contrast, this elderly friend of ours was unwell, confined to her home, and probably hadn’t had face to face interaction with anyone in at least a couple of days.

The question: is it better to give or to receive? At the heart of this question on this particular day wasn't my money or my stuff but rather my time and my ease.

There are so many times when I have made the other choice, the easy choice. But today, by His grace, we went to see our elderly friend. She stood in the bright sunlight of her living room, bent over her walker, and her eyes twinkled merry as Jake held up a vase of cheerful, red flowers and said, “Happy Easter. We love you!” Josh, waiting his turn, handed over a cellophane bag of child-decorated cookies tied shut with a bright green ribbon. He then stretched up his arms, waited as she stooped, wrapped his arms around her neck and planted a sloppy kiss on her cheek. As I stood there watching this unfold, there was no room for doubt.

It truly had been better for us to give.

All of this, small as it was, because a brother in Christ had written words of encouragement that had stirred my heart to want to give, and love, and do good works even when--or especially when!--it wasn’t the choice of ease. Driving home, I found myself in fresh wonder at the living organism that is the body of Christ. Part of how we grow in grace is to hear or read words of encouragement from our brothers and sisters, and likewise part of what we’re called to as Christians is to speak those words of encouragement to one another.

Countless times I have known God’s love, grace and provision through the intentional good works of another. I wonder how often there has been a person behind the person, a person speaking encouragement behind the person doing the good works. As a family of faith, we're interconnected, intended to be used in each other's lives to stir up one another to love and good works (Hebrews 10:24). What intricacy and beautiful detail is found in this design for how we, the body of Christ, are intended to function.

Posted by Elisha Galotti at 6:00 PM