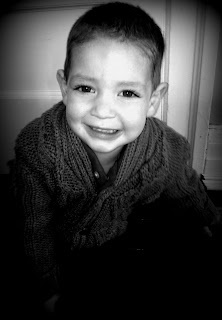 On any given night if you were able to listen-in while our family’s making our way home, driving across Humberside Avenue, you’d likely hear Jake or Justin playfully say to Joshua, “Hey, Josh! Look. We’re almost at the beautiful house. Are you about to get mad?” And with a grin, Josh would probably reply with something like, “I’m about to. I’m about to get really mad at ALL you guys.”

This family joke started about a month ago. Actually, the fuller context started long before that.

The Junction / High Park neighborhood is mostly comprised of beautiful, old brick homes. Traditional. And lovely. Of course it’s true that beauty really is in the eye of the beholder, and like all subjective things in life, when it comes to architecture and style, some people simply prefer modern over traditional. I’m not bashing the preference for modern. One of my best friends loves modern architecture and while I don’t ‘see’ what she sees, I understand that beauty in architecture is subjective. Also, on a side note, and maybe just to ensure that aforementioned friend-who-likes-modern-architecture doesn’t read this and think I’m a total jerk, this friend of mine has a far better eye for style and decorating than I do, and whenever I’m in her home, I’m inspired.

Disclaimers over. Back to the story.

There is a particular house on our traditional, brick-home lined street that has been totally gutted and renovated and turned into a very modern structure. It’s essentially a big, jutting black box with some bright orange, metal trim and three stories of frosted glass balconies. At night, these glass balconies light up a bright, neon purple.

Justin and I always have fun talking about this house while we drive past, and our conversation generally goes back and forth something like this:

"I wonder why someone would take a beautiful, brick home and do that?"

"It was such a beautiful house and now it’s so… cold."

"But it’s not just cold. It’s strange. And the purple lights are so ugly."

So one night, we’re mid-conversation, unaware that the kids have clearly been tuning in, when Josh forcefully interrupts:

“Daddy! Mommy! It's not true! The purple house is NOT ugly. The purple lights are NOT ugly. This house is byooaful." (Josh can’t pronounce the ‘t’ so beautiful comes out as byooaful.) "You always say it’s so ugly. I am so ANGRY at you guys right now!" (He is tearful, but shouting at the same time.) "It’s not ugly. It’s BYOOAFUL!"

We weren’t sure how to respond, and both Justin and I were struggling to keep from busting out laughing. Josh’s anger was so passionate and so inappropriate at the same time. Had our conversations about this house really offended our three-year-old so deeply? Certainly not. And yet we could tell that our little guy’s heart was actually grieved about this.

I spoke gently: “Hey buddy. Can I ask you a question?”

Josh, still fuming: “Is it going to be a RUDE question? Or a NICE question?”

Me: “I think it’s a nice question, Josh. I guess I’m just wondering… Why do you care so much about this house?”

At this point, Justin entered into the conversation, explaining to Josh that while it wasn’t OK for him to be so angry at us or shouting at us, it was most definitely OK for him to have a different opinion about the house. I’m pretty sure that the explanation about the subjective nature of beauty was lost on our three-year-old, but he got the main point: we don’t need to agree on which houses are beautiful.

As Justin and I reflected upon this funny incident later that night, we realized that poor Josh probably loved the bright colors of this house and always enjoyed driving past. Here we were, his parents, unaware of his ardent affection, openly and regularly criticizing something that he found to be lovely. For sure that would get annoying.

The day following this “byooaful”-house meltdown was a Saturday, and in the morning I was sitting with the boys on the couch watching some cartoons. Josh was perched on my lap, mesmerized by the Max & Ruby drama unfolding before him. I suppressed the knowledge that I should not do what I was about to do and did it anyway: leaning in close, I whispered in his ear, “Hey, Josh. What would you do right now if Mommy started telling you that the purple house was ugly?” He didn’t pry his eyes from the screen or give me his full attention, but I saw a faint smile cross his lips as he sweetly whispered back, “I’d probably have to start getting angry at you again, Mommy.”