This Spring we've been doing a ton of bike riding. There are innumerable things that I love about raising kids in the city (I know that statement sounds like an oxymoron to many!), and having destinations close enough for a four-year-old and two-year-old to reach is one of these things. Jake often bikes to school in the mornings, then the playgrounds some afternoons, or sometimes all the way to the church (a mile away). He's pretty fast. And other than one time when he didn't break powerfully enough and kinda slipped into the road (totally freaked me out, obviously), he's a typical city kid who knows and always follows the kid rules of the road; basically there is one rule, which is to never go on the street by himself. Ever. He'll zoom up ahead, and then wait for Josh and Ella and I to catch up. 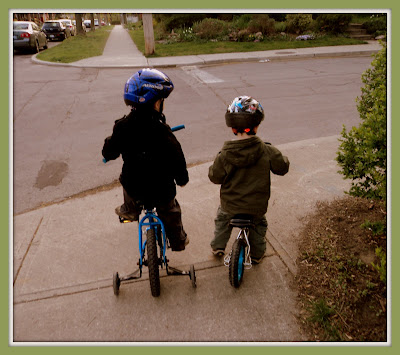 Josh has what's called a Strider bike. No pedals. We've seen tons of kids around the neighbourhood with these, and it's amazing how fast they zip along just by running their feet along the ground, then picking their feet up and coasting. Unfortunately, Joshua is about a half inch too short still, and so it makes it really hard for him to 'zip'... He shows so much perseverance though, even as he labours along at a snails pace. 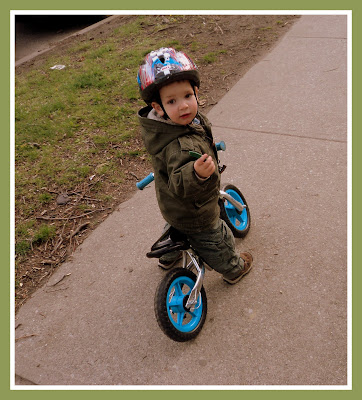 The other night, their beloved Aunt Caiah came over to hang out and join us at the playground, and her and I  were both getting such a kick out of Josh; he kept sort of just tipping over, slowly, crashing to the ground. It was peculiar because he was barely moving, and his feet were touching the ground, but he kept managing to wipe out. The first couple times he crashed, Caiah and I both braced ourselves for him to be a teeny bit hurt, or at least needing of some comfort. But nope, not Josh. Each time, while brushing the stones and dirt from his hands he'd say "I'm OK" and get right back on. That is so Josh. Even when he's hurt 'he's OK'... 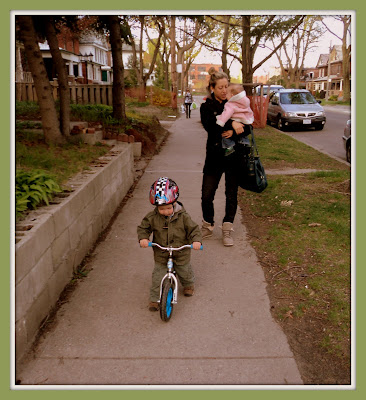 I have no doubt that this coming summer will be one of countless biking adventures with the boys. 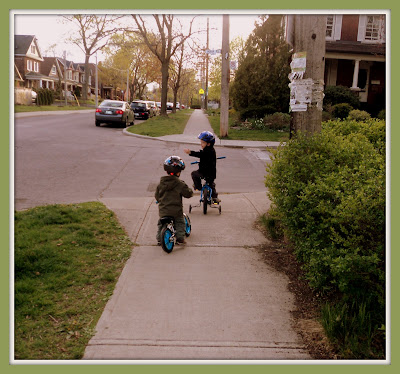