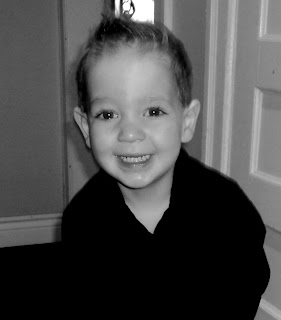 Like all kids, our boys will go through phases where they’ll say the same thing repeatedly, and we’ll see a little communication pattern develop. Sometimes these patterns are wonderful and Justin and I hope they last forever. Other times, we’re just hoping for grace to endure. And other times, it's just plain old funny. There are a few little ‘phases’ with both Joshua and Jake that Justin and I have gotten such a kick out of, that I want to start remembering on this little blog of ours before I forget permanently.

There were about two weeks of Josh’s little life where his dependable response to almost every instruction given to him was this: “I only obey God.” The first couple times he said this to me I was just like ‘who does this sanctimonious little toddler think he is?’ But then it became his response to pretty much everything in his life:

“Josh, you need to eat three more bites of your broccoli, OK buddy?” “I only obey God.”

“Hey Joshua, help your brother clean up the trains.” “I only obey God.”

During these couple of weeks, Justin and I found ourselves continually explaining to our two-year-old that although it was good that he was expressing a desire to obey, God had been very clear that He wanted children to obey their parents. I would explain to him that if he indeed wanted to be a pious little toddler who only “obeyed God”, then what he really needed to do was start obeying ME!!

My parents happened to be visiting here in Toronto while all this 'obeying' was going on. One night while they were here with us, Justin and I went out for a few minutes and my parents were hanging out with the boys. Joshua whacked his brother fairly hard on the head with a toy hammer, so my Pop intervened and was in the process of gently but very firmly sanctioning a time-out, when he hears the raspy voice of his two-year-old grandson declare: “I only obey God, Grandpa.” My Mom recounts with much laughter how my Dad kinda paused, startled, and looked at my Mom and asked “Nancy, did you just hear what I heard?”

Well, Joshua, I certainly do hope that as you grow older, you truly will obey God. And I hope, too, that you will always be willing to say aloud what you believe to be true. But… for now, kiddo, you’re going to have to be OK with the reality that you’re TWO, and that means that you’ve got to obey your Daddy and your Mommy.

Posted by Elisha Galotti at 9:15 PM