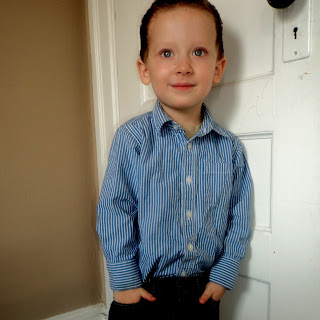 A few weeks ago Jake came skipping out of Kids Club with Justin, and I could tell that he was unusually excited to see me. After hopping into the back of the car (where he’s strategically placed in the middle seat separating his two-year-old brother from his baby sister), he leaned forward through the two front seats and said “Hey Mommy, I have something for you. You’re going to love it.” He uncurled his tightly clenched fingers, and resting in his palm was a little plastic ring adorned by this huge, bright yellow fake jewel. I could hear the expectancy in his question: “Do you want to wear it?” Obviously, kiddo. With a little effort, I coaxed this tiny little ring onto my finger. “Aw Jake, I love it. It’s beautiful. Where did you get it?” His explanation was to the point; he’d earned a prize and he wanted to give it to me.

After the next week’s Kids Club, I was presented with a similar gift, only this second ring had a fluorescent pink diamond shaped gem instead of a yellow one. Again, there was such delight in Jake’s voice as he asked me if I liked it.

The week following, I received a third flashy, plastic diamond ring to add to my collection. For whatever reasons, in the previous weeks I hadn’t asked Jake too many questions about where these rings came from. Maybe it’s just that each time I’d been so touched, so thankful for this gesture of love from my little guy, the moment being so complete in its own right that I didn’t feel any desire to fill out the picture. But as tiny hands passed me this third ring, I found I was curious.

I asked, and Jake explained: each week at Kids Club there is a Gold Box that holds wonderful and exciting treasures. Depending on a bunch of factors, the kids often get to choose one. According to Jake, these “awesome treasures” range from funky shoelaces to colourful bouncing balls to cool spin-tops, all of which are things that any four-year-old finds pretty splendid. Jake is no exception, and was totally animated as he described to me the Gold Box options.

“So Jake” I prod him, “With all these fun choices, why do you keep picking things for me?” And I tell you, I don’t deserve the words I was about to hear. Jake shrugs, kind of casual, like the answer’s obvious. “Because I love you, Mommy. And I thought you would like to wear the beautiful rings.” We looked at each other and smiled. And even now, thinking back, my heart feels the joy and also the weight of such love. For a kid who’s four, sacrificing bouncing balls and funky shoelaces in order to be able to give your Mom a ring… to delight in that sacrifice even… now that’s love.

There are so many moments of parenting that can be challenging, discouraging, or even heartbreaking. But then there are the ‘ring’ moments too; moments of overwhelming beauty where I glimpse the person that my child is becoming, and I’m totally amazed by the grace that me and my little people are being shown.

Posted by Elisha Galotti at 8:08 PM