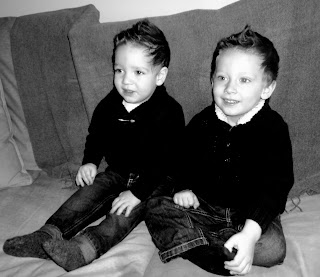 One of the most wonderful things about having Tinies around is that their presence, their conversations bring SO MUCH LAUGHTER. Perhaps the best description of the joy that little people bring is "more delight than you ever thought possible." It's true, isn't it? Grown ups can be clever and funny. But kids, in their transparency and honest reflections outdo even the most skilled comedian! As of late, I've been trying to quickly journal some of the things that Jake and Joshua say that fill our home with laughter. I fear that if I don't record it somewhere, I will just be left with this somewhat hazy recollection that they amused us, but I'll never be able to actually remember specifically what was said. So here goes:
While I'm putting Josh to sleep, hugging him, kissing him, I whisper these words to him: "I am so thankful for you, my son." He grabs my face with his hands, pulls me close and whispers in return "I am so thankful for my brown blanket." Yes... the brown blanket. Jake never had blanket (or even a stuffed animal) that he was particularly affectionate towards, nothing that garnered his commitment, so Josh's love and attachment for this little brown blanket, well this is a new thing for me. It's been so fun to see and be a part of. Justin calls him 'Linus' and I pretend that I understand the context, even though I don't really. I just know that Linus is somehow connected to a story about a blanket or something. I should google 'linus + blanket' so that I'm not being deceptive the next time I pretend to laugh understandingly.
Google. This brings me to another conversation that I'd like to tuck away. Jake and I are driving and talking, and we wind up on the topic of helicopters and airplanes. I'll admit right up front that I don't know very much about either of these, but at the time that this conversation was unfolding, I assumed that I would know more than my four-year-old. Well, Jake and I find ourselves disagreeing about whether helicopters have wings or not. I'm SURE I've seen wings on helicopters... I mean, I've never really looked carefully. And come to think of it, I've never even really thought about it... but of course they have wings, right? Why wouldn't they? Jake, on the other hand, HAS thought about this before, and has talked at length with Justin about the difference between helicopters and airplanes. I should have known. And I should have had the humility to back down sooner... but I find myself trying to defend my position, explain why 'of course helicopters would need wings', when Jake concludes our disagreement by saying "Well Mom, why don't we Google it? I KNOW that I am right, but let's Google it."
I'll admit, I wasn't expecting a four-year-old to play the 'Google it' card. I guess I shouldn't be surprised that toddlers know how to use the threat of Google in a debate... Anyway, he was right. And in case you're wondering, for the next time you're in a debate with a pre-schooler, helicopters don't have real wings, they just have a tail with tiny little wings on it. Jake was right.
Posted by Elisha Galotti at 8:21 PM