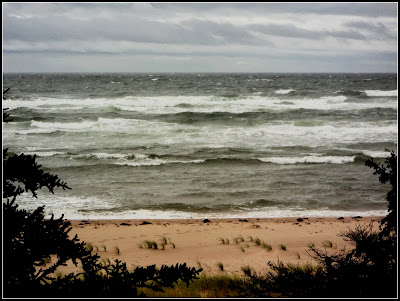 As I walk the ocean shore with my sleeping baby on back and salt waves splashing with each step, my heart is burdened heavy for a friend who is enduring a long and weighty trial and who, in the midst of it, has wavering confidence that he belongs to His Father. I think of this friend of Justin and mine, and since there is no person in sight, I pray for him aloud. “Show your face to Him. Be near to Him. Remind Him that you are a Father who will never be separated from His children.”

Ahead of me, resting in the sand, is a piece of driftwood that the waves of this storm and then a receding tide have washed to shore. Stooping, then brushing away wet sand from the wood’s surface, I marvel at the soft beauty and smooth contours. I wonder how long this piece of natural artwork has been drifting in ocean waves. Has it been months? Years? Crashing waves and pounding water has stripped bark, softened rough edges, and smoothed gnarls and knots.

The Artist has taken something ordinary and made it into something exquisite.

In ocean’s roar, His voice: “I hear the tumult of the raging seas as your waves and surging tides sweep over me. But each day the LORD pours His unfailing love upon me, and through each night I sing his songs, praying to God who gives me life.”

His love cannot not fail, because the One who has the power to calm a raging sea with a single word is the One whose blood forever covers His own. The waves may relentlessly pound, but the water of a thousand oceans could never wash away His blood; the Father pours out His unfailing love because the Son poured out His own blood.

And so at the end, when the waves calm and the winds settle and the sun finally breaks through the clouds, we see it resting on the sand: a piece of artwork beautified by every wave of the storm, where each contour, each detail, has been refined into something more lovely than we ever could have imagined.

His love, it does not fail.
Posted by Elisha Galotti at 2:32 PM