A conversation between a mother and her 5-year-old. 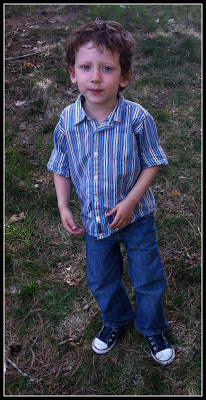 Jake: Mom, when I become a man, will my name change?

Me: That’s an interesting question, Jake. What do you mean? Why do you think it might change?

Jake: Well, I was just thinking that maybe when I turn into a man my name will become Justin, like Dad’s.

Me: Ah, I see. I thought maybe you were thinking about the story of God renaming Jacob. Ya, nope. You’ll be Jake Eby Galotti for the rest of your life, kiddo.

Jake, still musing: So Mom, one day when I’m a man and have my own kids, I’m going to be such a fun Dad. I’m never going to make my kids go to sleep at night or have naps in the afternoon, and in the morning, when they wake up, I’ll give them ice cream for breakfast. They’ll love it.

Me: Well now, that DOES sound really fun. You know what, Jake? I’m going to remember this conversation and write down what you just told me and, in twenty years or so, when you’re a Dad with kids of your own--

Jake, interrupting me: Actually, I’m going to do some stuff first, before I have kids. I want to move to the jungle, either in China or in Africa, and live there for a while.

Me: That sounds pretty exciting! Maybe you’ll be a missionary and you’ll go to some really cool place to preach the Gospel.

Jake: Nah, that’s not why I’m going. I actually just want to hunt some tigers and maybe some leopards. I’ll be a hunter. A jungle hunter!

Josh, chiming in: That sounds AWESOME! I’m going to hunt some tigers and some leopards too, Jake!

Me: OK OK, hold up you two. Jake, before we start talking about jungle hunting, I just want to tell you that when you’re a Dad one day, I’m going to remind you about what you said—how you’re never going to make your kids sleep and how you’re going to give them ice cream for breakfast and stuff.

Jake, smiling: No. Actually, Mom, I’m not going to do that anymore, so you don’t have to remind me later. I changed my mind because, well, if my wife finds out what I’m doing she’ll be so mad at me. Maybe I’ll just be sneaky once in a while, though. 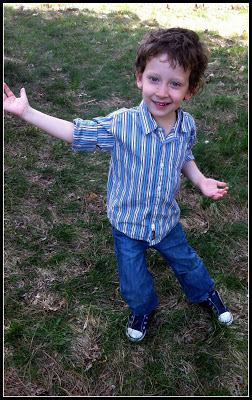 Posted by Elisha Galotti at 8:07 PM