CATECHISM AS REVISED BY A 3-YEAR-OLD 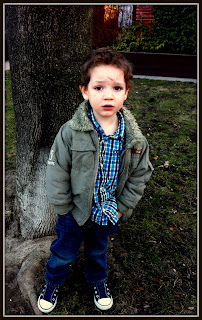 For the past few months during our church’s mid-week service, the younger kids have been learning the WestminsterCatechism, preschool version. It's been a fun and wonderful weekly study, with each question providing the topic for lively conversation about different theological truths. Though the questions and answers are rich, they’re also simple and age appropriate.

It’s been awesome to see how this weekly study is providing helpful categories and understanding to the minds of our little guys. Recently I overheard our 3-year-old say that God has wings and can fly around, to which our 5-year-old patiently responded, “No, Josh. God doesn’t need wings and he doesn’t need to fly around. He is already everywhere because He is a spirit and has not a body like men.”

Last week, we arrived at question seventeen. After an opening game and then illustrative story, I read the question and answer: Of what were our first parents made? God made the body of Adam out of the ground, and formed Eve from the body of Adam.

As I spoke this to the group of children before me, I couldn’t help but notice the animated response of my middle son, Josh. First, his jaw dropped in disbelief. Next, his eyes began to twinkle with delight. Finally, he brought both hands up to his face where he covered a surprised but delighted grin.

I wasn’t sure what was running through his young mind, but, well, kids can be crazy, right? I didn’t dare pause and ask him what he kept gasping and smiling about.

As is generally our habit when the answers have more than one clause, the kids and I practiced this answer with some dramatic gestures that would, hopefully, help us remember the words. As our recitation proceeded, Josh continued to look happily--almost scandalously--surprised, and he kept glancing at the children on either side of him to see if anyone else shared in his shocked joy.

If I had seen this response in another child, I likely would have paused and asked them for clarification. But Josh loves to laugh and has an intuitive silly streak in him, so I assumed he was just being silly and decided to overlook his antics since they didn’t seem to be distracting anyone else.

But when it came to Josh’s turn to recite the answer on his own, it all became clear. With perfect diction and just a hint of scandal, Josh spoke. “God made the POTTY for Adam out of the ground, and formed Eve from the POTTY of Adam.”

The children erupted into laughter and I, the teacher, couldn't help but do the same. “So that's why you were covering your mouth in shock, Josh. I get it now, buddy.”

As I explained to him that it wasn’t potties that had been formed but rather bodies, I couldn’t help but imagine how enchanted Josh must have been. Here I was, his mother, the one usually casting reproachful glances toward his 3-year-old potty humor, not only making potty jokes myself but doing it at church, while teaching! And then, if that weren’t enough to captivate the heart of any potty-joke-loving-3-year-old, I proceeded to--scandalously!--make all the kids in his class repeat the joke as well.

For those few minutes, to my potty-humor loving preschooler, I bet I was the coolest mom on the face of the earth.

Posted by Elisha Galotti at 7:14 PM