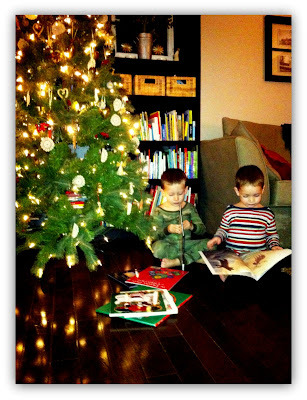 I don't remember exactly when, but at some point in my childhood I learned with a rather crushing sorrow that 'Hark! The herald angels sing' was not about what I thought it was about.

Up until that moment of realization, whenever we sang that carol about Harold, I always felt a particular joy. This man, Harold, who we were singing about? He was a pastor who my family loved, and he was the man who had baptized me when I was just an infant. In my child-mind, Harold and I had a special connection. And here we were, at Christmas, singing about my beloved Harold. When me and my family gathered around the tree and sang about him, I sang at the top of my little lungs.

There are so many things like this, aren't there? Those things that seem so real and true and vivid when we're children. And then at some point, we grow up. We learn the lyrics to real life.

I wasn't sure if I heard right, so I double checked.

"Tis the season to be WHAT, Jake?"

"Tis the season to be Charlie!"

I was curious. "What do you think that means, Jacob? Who is Charlie?"

There was no hesitation in his response: "Charlie is a knight who has a sword and knows Samurai moves and defends princesses. Hi-Yah! Hi-Yah! Hi-Yah! Tis the season to be Charlie! Hi-Yah!" Glancing in the rear view mirror I was able to catch a shadowed glimpse of Jake's demonstration from behind the confines of his car-seat straps. What I saw left little room for doubt: 'Charlie' from Deck the Halls must indeed be a true karate master and Princess defender.

For a brief moment I contemplated correcting him or asking him to trace his mental steps and share with me how he had arrived at such a wild and wonderful conclusion.

But really, what's the difference? This Charlie character seems like a pretty jolly fellow.