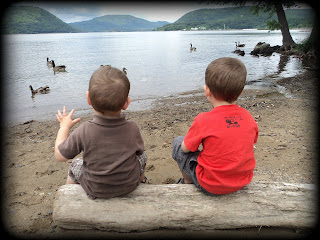 It's always fun to eavesdrop on Jake and Joshua. Their conversations, whether funny, sweet, or straight up ridiculous, provide an interesting insight into these two little men of mine.

Joshua has been a funny kid to potty-train because his emotions towards the process go from hot to cold in mere moments. One moment he’ll be bragging to Baby Ella that he’s a big boy who wears real undies, and the next he’ll be pining for the ‘good old days’ when he could still wear diapers. A few days back, he was storming around the house muttering under his breath that he “hates potty training” and that he “wants to wear diapers again – even SOGGY ones.” (This made me secretly laugh. I couldn’t help it. What kind of two-year-old actually articulates, with clarity, the kind of diaper they’re willing to wear in order to avoid being potty trained?)

Jake, too, must have been listening to Josh’s lament; he encouraged his little brother with these words: “Josh, when I was your age, I had to learn how to be potty-trained too. We are so proud of you.”

My sweet Jake. Even though I know kids are typically just repeating things they’ve heard others say, I’m always heartened to hear them speak this way to each other.

A couple nights ago, after story time, I again heard Jake step into an older-brother role where he was encouraging and trying to clarify things for Josh.

Josh: Because I don’t like it. I hate it.

Jake: Then why are you saying you hate it?

Josh: Because I hate Halloween!

Jake: But you just said you like it, Josh!

And I think it was right about at that moment that the conversation turned argumentative.

Occasionally Jake will offer up a nugget of wisdom or some little life-secret he’s learned along the way.

Once, after watching a particularly tumultuous couple of minutes that involved disobedience, crying, discipline, and more crying, Jake gently offered these words of wisdom to his teary-eyed younger brother: “Josh, if you just learn to obey, your life will be perfect.”

A serious overstatement, but I understand what he was trying to communicate. (And just to be clear, this statement was original to Jake… we don’t make a habit of promising our children utopia if they simply learn to obey.)

The most recent conversation that struck me as particularly ridiculous was while we were in the car running errands. I’m driving, the three kids are strapped in the back, and I tune-in as the conversation unfolds:

Joshua: Where are we going?

Jake: To Walmart. I loooove Walmart. (He does. He’s classy like his Mom.)

Joshua: Yes it is. I hate Walmart. Walmart is really, REALLY weird.

Joshua: (muttering, obviously incensed at my response) I am not weird. Ella is not weird. WALMART is weird!

Jake: (after a reflective pause) So, Mom? You’re saying that when God created us, he created us to be weird?

Hmmm… Not exactly what I was trying to communicate, but…