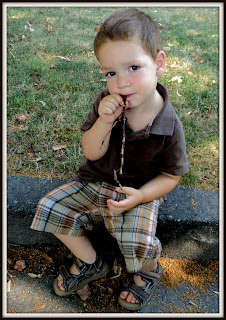 The three Tinies and I have just arrived home, and as we’re making our way into the house, Josh and Jake pause to pluck a couple gooseberries from our neighbour’s front garden. (They’ve been given permission to help themselves as often as they wish.) “C’mon, you two! In we go right away! Time for naps.” I hear my words, and they’ve been spoken more from habit than from need. It will not affect them, me, or the schedule of our day for them to linger at the neighbour’s garden gate in search of another ripe gooseberry or two. My instruction to "hurry up" has visibly altered this moment, my words making their choice clear: obey Mom and keep walking, or pause a moment longer and enjoy another delicious gooseberry. I watch as two little boys momentarily struggle with the decision, ultimately listen to my directive, and continue into the house. I’m thankful for their decision to obey (in large part because it certainly isn’t always the response), but I’m disappointed with my own decision, the one to hurry them along. What’s the rush? Was I rushing to start naptime two minutes earlier? Was I rushing to get started on my various tasks two minutes earlier?

I’m reminded of the time when Joshua and I had returned home from the grocery store and were walking up the stairs, he in front, and me following behind with a couple light bags. For some reason (that only a toddler would likely understand) he decided he wanted to lie down on each step before standing back up and moving on to the next step. There are fifteen steps. And when I say he wanted to lie down, I literally mean that he was fully prostrating his body on every single step before continuing to the next. Though I instinctively found myself wanting to hurry him along, I restrainted the impulse and briefly reflected on why I felt this need to rush. The grocery bags were light. There was plenty of time before dinner. Jake and Ella were both content and safe. The only reason we were about to rush through this idiotic, but strangely fun, stair-climbing exercise was because I was in the habit of rushing.

So instead hurrying him along or telling to him get up and walk normally and “for goodness sake stop acting like a two-year-old!!!”, I delighted in the simple silliness that was unfolding before me. We started laughing together, Josh and I. He asked me if I wanted to do it with him. I told him no thanks. We had such fun together in that minute of ridiculousness.

Most of life is lived on a schedule, either our own or someone else’s. For the most part, this is a good thing. A daily rhythm is helpful and healthy; patterns and the expectation of ‘what comes next’ contribute to the peacefulness of a home. But if my aversion to intentionally slowing down is that I’m concerned about my kids learning about punctuality, or acquiring the art of how to rush and move quickly, maybe I just need to remember that most of life requires this. In the moments that do not, the gooseberry moments or the stair-prostrating moments, I want to remember to slow down, to enjoy my little people, to make memories, and to ask myself ‘what’s the rush?’ The answer just might be… nothing.