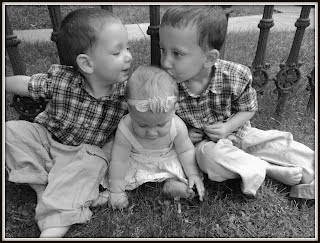 There are countless moments of misunderstanding with the boys that so easily lead to laughter and delight. But out of all these times, Justin and I sort of have a favorite that involved Jake, Joshua, and an unborn Ella Grace.

I was probably about 8 months pregnant with our baby girl (though at the time we didn’t know she would be a she) and I had just undergone a particularly difficult afternoon with the two boys. They were fighting and being unkind, and I was being impatient and short-tempered, and all three of us were a bit of an emotional mess. As the story unfolds, I find myself sitting on the kitchen floor with Jake on one knee and Joshua on the other, big pregnant belly in between, and I have tears on my face as I’m encouraging them to be kind to each other. “Boys, you’re each others brothers. It’s so important that you love each other. And it’s so important that I love you guys better than this. This is one of the things that God tells us that He cares about most: that we would love each other.” I could sense the tension, the anger, totally diffusing, and both boys sorta were nodding and looking at each other with a little less hostility. I will never forget what happened next. Jake, with a tender and affectionate look on his face leans in close to Joshua, puts a gentle hand on his shoulder and says “Josh, when the new baby comes, you’re going away.” I sat there for a moment in total bewilderment. Josh was not bewildered but was totally enraged.“No!” he shouts, and clocks his older brother, point blank range, right in the face. (One of the funny parts, to me, is that I doubt Josh even understood what Jake had just 'revealed' to him. And yet his response was so fitting. Totally wrong, mind you. But fitting nonetheless.)

“Boys! No, no!” This isn’t how this conversation was supposed to conclude. It was all going so well… I asked Jake why in the world he would say something like that to his baby brother. I detected genuine confusion on his face as he replied: “Because I wanted to tell Josh that when the new baby comes he’s going away. He’s going to go up into the sky with Jesus.” And at this point I could tell that he wasn’t trying to be mean to his brother. In fact, to the contrary, it almost seemed like he was trying to gently warn him about his approaching departure so that it wouldn’t come as a surprise. “But Jake, why do you think this?” And as he explained, it immediately made sense. Several times in the preceding days he had asked me this question: “When the new baby comes, will there be two babies?” And I, thinking that he was asking if there were one or two babies in my belly, would always unthinkingly respond “No no, sweetheart. There will just be one baby.” I hadn’t put it together. Since these were pre-Ella days, our whole family still referred to Joshua as ‘the baby'. Each time Jake had asked this, he was trying to figure out if there were going to be “two babies” (Josh and the new baby) or not. Based on my continual reassurance that there would just be one, he formed a rather logical conclusion I suppose.